Fortnite is an online video game developed by Epic Games and released in 2017. It is available in three distinct game mode versions that otherwise share the same general gameplay. Fortnite: Save the World is a player v environment cooperative game, with four players collaborating towards a common objective on various missions.

The game is set after a fluke storm appears across Earth, causing 98% of the population to disappear, and the survivors to be attacked by zombie-like “husks”. The players take the role of commanders of home base shelters, collecting resources, saving survivors, and defending equipment that helps to either collect data on the storm or to push back the storm. From missions, players are awarded a number of in-game items, which include hero characters, weapon and trap schematics, and survivors, all of which can be leveled up through gained experience to improve their attributes.

Fortnite Battle Royale is a player-versus-player game for up to 100 players, allowing one to play alone, in a duo, or in a squad (usually consisting of three or four players). Weaponless players airdrop from a “Battle Bus” that crosses the game’s map. When they land, they must scavenge for weapons, items, resources, and even vehicles while trying to stay alive and to attack and eliminate other players. Over the course of a round, the safe area of the map shrinks down in size due to an incoming toxic storm; players outside that threshold take damage and can be eliminated if they fail to quickly evacuate. This forces remaining players into tighter spaces and encourages player encounters. The last player, duo, or squad remaining is the winner. 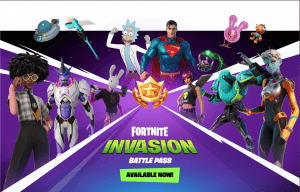 Fortnite works on a lot of Systems like Android, playstation 4 (PS4) iPhones, iPads, Xbox, Computers like Windows, Mac and Nintendo systems like the switch. So you have many options to choose from to play this super fun game.

I love playing this game on my PS4 and my Nintendo Switch, you can really enjoy the game and all the effects. If you love laying Roblox, you will love playing Fortnite

Come Play Fortnite With Me

If you like this video, make sure to subscribe to notifications on my Channel by clicking on the notification at the bottom of the page
Camera used in video:
Camera Tripod:
Photo studio lighting:
Photo Studio Green Screen Set
Spread the love

Discord by Eurobeat Remix is a great song, so I decided to sing along with the beat. I have listened this song for a long time, when listening to pandora. I liked the original version, […]

Christmas Light Display: It is just before Christmas, we decided to take a ride around town to look at all the Christmas decorations of our neighborhood houses. This year many people decorated for Christmas, the […]