Monopoly Gameplay, here I will be playing this new game I bought for my Sony Playstation 3.  If you love playing the old style monopoly, you will love playing this game on the ps3 system. Monopoly Streets is a video game based on the board game of the same name, and one of many in the Monopoly video game series. Developed by EA Salt Lake and published by Electronic Arts, the game was released on the PlayStation 3, Xbox 360, and Wii system on October 26, 2010. 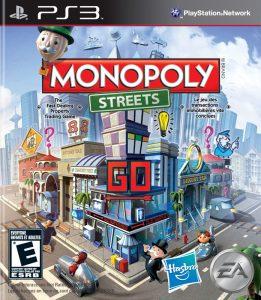 Experience Mr. Monopoly’s world at an interactive, 3D street level in celebration of the 75th anniversary of the beloved Monopoly game. Add houses to your properties and watch as high-rent districts sprout mansions and lavish hotels

Occupy your own property headquarters; watch it rise to luxurious splendor or fall into a dilapidated ruin in tune with your fortunes. Add competition to the game by auctioning properties with your friends – snatch a great deal or try to break your rival’s bank. Establish and save house rules to play longer or shorter based on your own schedule. For 1-4 players, Get Rich Quick In this all-new, super-fast version, trade properties and compete in exciting mini-games to see who makes the top of the rich list. Group Play Up to four players can simultaneously join in on the rags to riches fun. Now Boarding Fill up your passport as you play to unlock new and never-before-seen MONOPOLY boards.

My thoughts of the Monopoly Streets Game

After playing this game for sometime, I love it! This game is super fun to play, I can choose what I want to be and what properties I can buy. Since I have the PS4, I will have to try this Game on the new system. The Playstation 3 is still a good gaming system, I have lots of Games that goes with the PS3.

If you like this video, make sure to subscribe to notifications on my Channel by clicking on the notification at the bottom of the page